The Mandelbrot set is one of the best-known examples of mathematical visualization, beauty, and motif. It has become popular for its aesthetic appeal and as an example of a complex structure arising from the application of simple rules.

The Mandelbrot set is a set of complex numbers {\displaystyle c}

does not deviate when iterating from{\displaystyle z=0}

Zoom in to the Mandelbrot set

Its definition is credited to Adrien Douady who named it in honor of the mathematician Benoit Mandelbrot . [1] The set is connected to a Julia set , and the associated Julia sets produce similarly complex fractal shapes.

Figure Mandelbrot sets can be generated by sampling complex numbers and testing, for each sample point{\displaystyle c}

go to infinity (in practice does it leave some neighborhood predefined value of 0 after a predefined number of iterations). If the real number and the imaginary part of{\displaystyle c}

whose sequence has not crossed a threshold after a predetermined number of iterations (this is necessary to clearly distinguish Mandelbrot set images from complementary images). When{\displaystyle c}

instead, it gets the set value Julia for each point{\displaystyle c}

in the space parameter of the function.

Images from the Mandelbrot set show complex and very complicated boundaries that reveal increasingly finer recursive detail at increasing magnification. In other words, the boundaries of the Mandelbrot set are fractal curves . The "style" of these repeating details depends on the region of the set being examined. Set boundaries also incorporate smaller versions of the main shape, so that the fractal property of self-similarity holds for the entire set, and not just for its parts.

Mandelbrot sets have their origins in complex dynamics , a field first investigated by French mathematicians Pierre Fatou and Gaston Julia in the early 20th century. The fractal was first defined and drawn in 1978 by Robert W. Brooks and Peter Matelski as part of a Kleinian group study .. [2] On March 1, 1980, at the IBM Thomas J. Watson Research Center in Yorktown Heights , New York , Benoit Mandelbrot first saw visualization. [3]

Mandelbrot studied the parameter space of quadratic polynomials in an article appearing in 1980. [4] The mathematical study of Mandelbrot sets really began with the work of mathematicians Adrien Douady and John H. Hubbard (1985), [1] who established many of their fundamental properties and named the set in honor of Mandelbrot for his influential work on fractal geometry .

Mathematicians Heinz-Otto Peitgen and Peter Richter became known for promoting the set with photographs, a book (1986), [5] and an exhibition touring the international Goethe-Institut Germany (1985). [6] [7]

A cover article in the August 1985 Scientific American introduced a wide audience to the algorithm for calculating the Mandelbrot set. The cover features an image located at −0.909 + −0.275 i and created by Peitgen et al. [8] [9] Mandelbrot sets became popular in the mid-1980s as computer graphics demos , when personal computers became powerful enough to plot and display sets in high resolution. [10]

The work of Douady and Hubbard coincides with a major increase in interest in complex dynamics and abstract mathematics , and the study of Mandelbrot sets has become a centerpiece of this field. The full list of everyone who has contributed to the understanding of the set since then is long but would include Mikhail Lyubich , [11] [12] Curt McMullen , John Milnor , Mitsuhiro Shishikura and Jean-Christophe Yoccoz .

remain restricted . [13] Thus, a complex number c is a member of the Mandelbrot set if, when starting with z 0 = 0 and applying iteration repeatedly, the absolute value of z n remains bound for all n > 0.

Mathematician's description of the Mandelbrot set M . Point c is colored black if it is included in the set, and white if it is not. Re [ c ] and Im [ c ] show the real and imaginary parts of c .

The graphical representation of the Mandelbrot set and its structure in the edge area is only possible on a computer using so-called fractal generators . Each pixel corresponds to a value{\displaystyle c}

complex field. For each pixel, the computer determines whether the associated sequence is diverging or not. That's the amount{\displaystyle |z_{n}|}

exceed, it is clear that the results are diverging. Number{\displaystyle n}

the iteration step up to that point can serve as a measure of the degree of divergence. Pixels are assigned a color according to a predefined color table that corresponds to each value{\displaystyle n}

In order to achieve a harmonious boundary between successive colors from an aesthetic point of view, the boundary is used in practice{\displaystyle s}

not the smallest possible value{\displaystyle s=2}

selected, but the value is significantly greater than{\displaystyle 2}

, otherwise the color bar width will oscillate. The larger this value is chosen, the better the color boundaries correspond to the equipotential lines , which result when the Mandelbrot set is interpreted as electrically charged conductors . For continuous color gradients, As in the zoom series above, factor evaluation is required where{\displaystyle s}

Due to the number of iteration steps{\displaystyle n}

, after that the limit{\displaystyle s}

exceeded, can be of any size, a stopping criterion in the form of the maximum number of iteration steps must be specified. Score{\displaystyle c}

, the consequences of which have not yet exceeded the limit{\displaystyle s}

expected. The smaller the distance{\displaystyle c}

is, the bigger the number{\displaystyle n}

displayed, the greater the maximum number of iteration steps that must be selected, and the more computation time is required. It can be seen that the order of the initial values{\displaystyle c}

converge, the computation of the sequence can be terminated earlier.

The graphical representation of edges is very attractive{\displaystyle \mathbb {M} }

with a wealth of forms. The greater the magnification selected, the more complex structures can be found there. With a suitable computer program , these edges can be displayed as on a microscope at any magnification. The only two artistic liberties that exist are the selection of image parts and the assignment of colors at divergence levels.

Zooming in is often necessary to examine desired structures, which cannot be computed with hardware-supported data types because of their limited accuracy. Therefore, some programs contain an arithmetic long number data type with arbitrarily selectable precision. This means that (almost) any zoom factor is possible.

The Mandelbrot set is a compact set , because it is closed and contained in a closed disk with radius 2 around the origin . More specifically, one point{\displaystyle c}

is included in the Mandelbrot group if and only if

must stay at or below 2 for{\displaystyle c}

is in the Mandelbrot set, as if that absolute value exceeded 2, the sequence would pass to infinity. 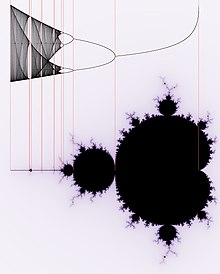 iterations are plotted on the vertical axis, the Mandelbrot set can be seen to branch where the set is finite

with the exact real axis being the interval [−2, 1/4]. Parameters along this interval can be entered into a one-to-one correspondence with those in the actual logistic family ,

In fact, it provides a correspondence between the entire parameter space of the logistic family and that of the Mandelbrot set.

. After further experimentation, he revised his conjecture, deciding that{\displaystyle M}

must be connected. There is also a topological proof for connectedness discovered in 2001 by Jeremy Kahn . [14] 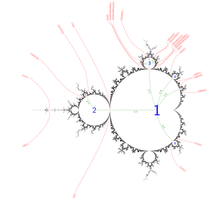 External rays emerge near period 1 continents in the Mandelbrot set

The dynamic formula for the uniformity of the complement of the Mandelbrot set, which arises from Douady and Hubbard's proof of relatedness{\displaystyle M}

, giving rise to the external rays of the Mandelbrot set. These rays can be used to study Mandelbrot sets in combinatorial terms and form the backbone of Jean-Christophe Yoccoz's #Mathematics work . [15]

the limit of the Mandelbrot set is exactly the branching locus of the quadratic family; that is, a parameter set{\displaystyle c}

It can be constructed as a bounded set of plane sequence algebraic curves , which are Mandelbrot curves , of the general type known as polynomial lemniskats . The Mandelbrot curve is defined by setting p 0 = z , p n +1 = p n 2 + z , and then interpreting the set of points | p n ( z ) | = 2 in the complex plane as a curve in the Cartesian plane of degree 2 n +1 in x and y. This algebraic curve appears in a Mandelbrot drawing set calculated using the "escape time algorithm" mentioned below.

closely related to the particular behavior of the sequence of numbers, that is{\displaystyle \mathbb {M} }

the underlying. Depends on the value{\displaystyle c}

, there are four possibilities:

that compose the interior of the cardioid , the "body" of{\displaystyle \mathbb {M} }

, as well as for their innumerable many boundary points. Periodic boundary cycles can be found at (more or less) "stubs" of circular values as in "heads", in satellite cardioids as well as at many edge points of this component. A fundamental conjecture says that there is a limit cycle for all points in the Mandelbrot set. The sequence is strictly pre-periodic for innumerable parameters, which is often called the Misiurewicz-Thurston point (after Michał Misiurewicz and William Thurston ). This includes the dot-like "antenna tip".{\displaystyle z=-2}

the far left and the branch point of the Mandelbrot set.

In the innumerable other points of the Mandelbrot set, sequences can behave in a variety of ways, each of which results in a very different dynamical system and some are the subject of intensive research. Je according to the definition of the word, "chaotic" behavior can be found.